Special Mission for the Blue and Golds 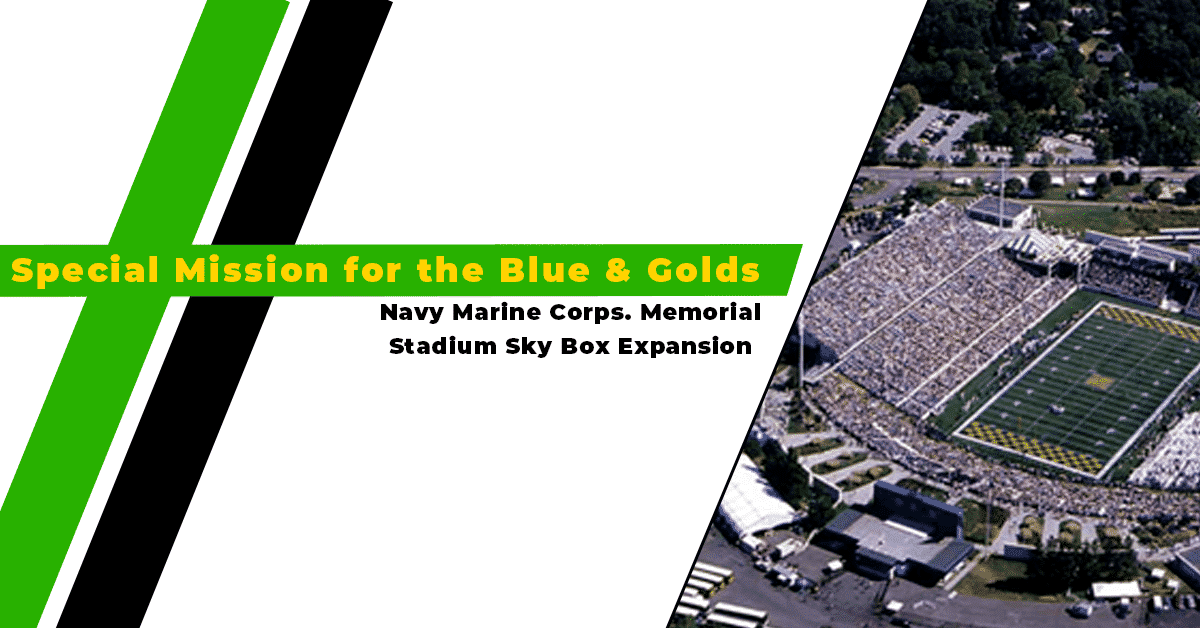 Special Mission for the Blue and Golds

The U.S. Naval Academy maintains a tradition of producing young men and women who will go on to lead one of the country’s five branches of the military. The academy expects excellence in the classroom and excellence in the sports arena. A plan was developed to make modifications to the Navy-Marine Corps. Memorial Stadium in Annapolis, Maryland, one CSDA member had to be at the top of their game to complete a portion of this challenging project.

The stadium was opened in 1959 and is home to the Navy Midshipmen football team, the Navy Men’s Lacrosse team, and the MLL’s Chesapeake Bayhawks Lacrosse team. The Naval Academy needed to renovate a section of a mid-level wall in the 34,000-seat venue to incorporate elevator access to new skyboxes at the east end or “gold” side of the stadium. There was only a short time available to carry out this renovation, as the graduation ceremony for the 2010 Naval Academy class was about to take place just two days after the work was due to start.

The mid-level exterior wall of the stadium consisted of two 8-inch-thick concrete walls with a small space between them. An opening measuring 14 feet wide by 4 feet tall was required and was to be included being safety sealed. Besides, further cutting work would be necessary some weeks later inside the stadium to allow the general contractor to connect the new skyboxes to the existing structure. This work would consist of cutting 136 feet of a concrete wall that varied in thickness from 8 to 12 inches.

Aerial View of the Stadium

Structure Tone, Inc. of Washington, DC, was the general contractor for the stadium renovation work. The company selected Viking Enterprises as the demolition contractor for the job, who then contacted CSDA member G&S Concrete Cutting of Rockville, Maryland, to perform the specialist cutting work that would create the specified opening.

“We were very proud to be called in on such a fast-paced, high-profile project,” said Rob

White, Operation Manager for G&S. “Viking Enterprises came to us because of our professionalism and ability to work within a strict time.”

For the creation of the 14-foot-wide by 4-foot-tall opening, G&S proposed a plan to use a diamond wall saw to cut the section free. The general contractor was in agreement with this plan, and no other methods of demolition were considered. Alternative demolition methods, such as jackhammers, would have produced large amounts of debris and much more time would have been required to attain the precise dimensions of the specified opening. Before work commenced, G&S needed to subcontract a crane operator for the next day to hold the cut section of concrete during cutting and remove it. A 100-ton Liebherr crane was supplied. The following day, G&S arrived on site to set up equipment to begin cutting the opening. An operator core drilled two 4-inch-diameter holes through both 8-inch-thick outer precast and inner cast walls using a CB748 core drill from Diamond Products. The holes were to be used to thread through crane connections for the safe removal of the sections, once cut.

Implementation of the Plan

The cutting team, working approximately two stories up in a boom lift, used a hydraulic hand saw with a 20-inch Diamond Products blade to perform the wall cuts, before switching to an ICS 880 series chain saw to complete the corner cuts. Cutting and removal of both inner and outer wall sections, weighing 9,520 pounds and 5 tons respectively, were completed within five hours of the first day’s work. Following the successful completion of this cutting work within a short time scale, G&S was contacted several weeks later for another job.

Within three weeks, the contractor was asked to return to the stadium to cut and remove 136 linear feet of concrete from the top wall. The cutting work was split into eleven 12-foot-long sections that ranged from 8 to 12 inches thick. Some parts were to be cut by wall saw and removed by crane, while other sections had to be cut free using a hand saw and placed onto pallets for removal.

Corner cuts were made using a diamond chain saw.

New skyboxes were installed at the top of the stadium after cutting because of a 52-foot-long by a 5-foot-wide overhang on the part of the wall would not allow access by the crane. The team from G&S took 12 days to cut and remove the 12 sections of concrete. A Hydro stress wall saw from Tyrolit, with a 36-inch-diameter blade from Diamond Products, was used to make the cuts and wet vacuums were employed to collect and contain any slurry. Cutting of each section took three hours, while removal by crane took 30 minutes for each 4.2-ton piece from inside the stadium.

The use of pallets to remove some of the cut wall sections worked well as an alternative method of removing those concrete sections with an overhang, but there were a couple of other factors that presented challenges for G&S. Water supply for cutting and the positioning of hydraulics at the work area required some extra effort. The cutting area was located 250 feet above the nearest water supply, so a water hose had to be run-up to the top of the stadium to allow wet cutting. The foundation and sections of the steel structure had already been set in place to construct the new skybox, so the positioning of the contractor’s truck and hydraulic equipment was limited. The general contractor was able to remove a section of fencing around the stadium to move the truck and equipment closer to the work area.

Cut wall sections were lifted out by crane or placed on pallets for removal.

Testimonial from CEO -”We are happy to have completed this work for the Naval Academy, and are pleased with the results,” said Preetie Ghotra, CEO of G&S.